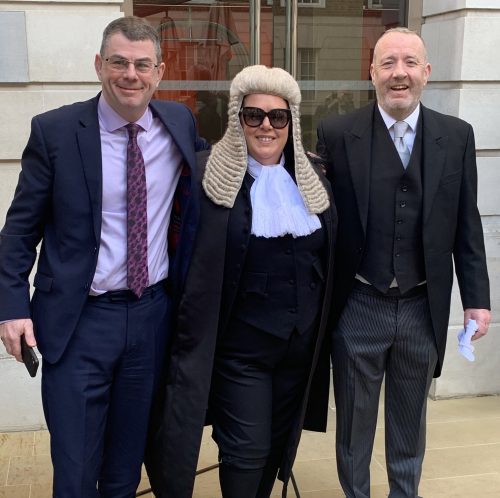 Samantha Hillas QC has officially been appointed Queen’s Counsel after a ceremony at Westminster Hall in London.

A senior member of the matrimonial finance team, Samantha was called to the Bar in 1996, and has built a reputation as a specialist in high net worth and complex cases, especially those involving marital agreements, trusts and corporate structures, cases involving non-disclosure and Schedule 1 Children Act.

Samantha has been consistently included in the legal directories, where most recently she was recognised as “a rising star and great advocate, with an excellent ability to grasp the heart of the case quickly” (Chambers UK Bar) and “a force to be reckoned with” (Legal 500).

Samantha is one of 114 new Queen’s Counsel appointments, made by Her Majesty The Queen on the advice of the Lord Chancellor, Robert Buckland QC, MP, following consideration by the independent Queen’s Counsel Selection Panel. This year 60 per cent of women who applied were successful, an increase of 10 per cent from 2018.

Frances Heaton QC, Joint Head of Chambers at St John’s Buildings, said: “We are delighted that Samantha has been appointed Queen’s Counsel – it is testament to her expertise, her hard work and her constant drive to put her clients first.

“Following the appointment of Lorraine Cavanagh QC last year, Samantha will be the fifth member of our family team to take Silk and it is fantastic to see our first-rate reputation in family law go from strength to strength.”

Commenting on the new Silk appointments, Sir Alex Allan, Chair of the Selection Panel, said: “’I am delighted at the announcement of the new Silks. I congratulate each one of them – the selection process is a rigorous and demanding one.”

Everyone at Chambers sends our warmest congratulations to Miss Hillas QC.